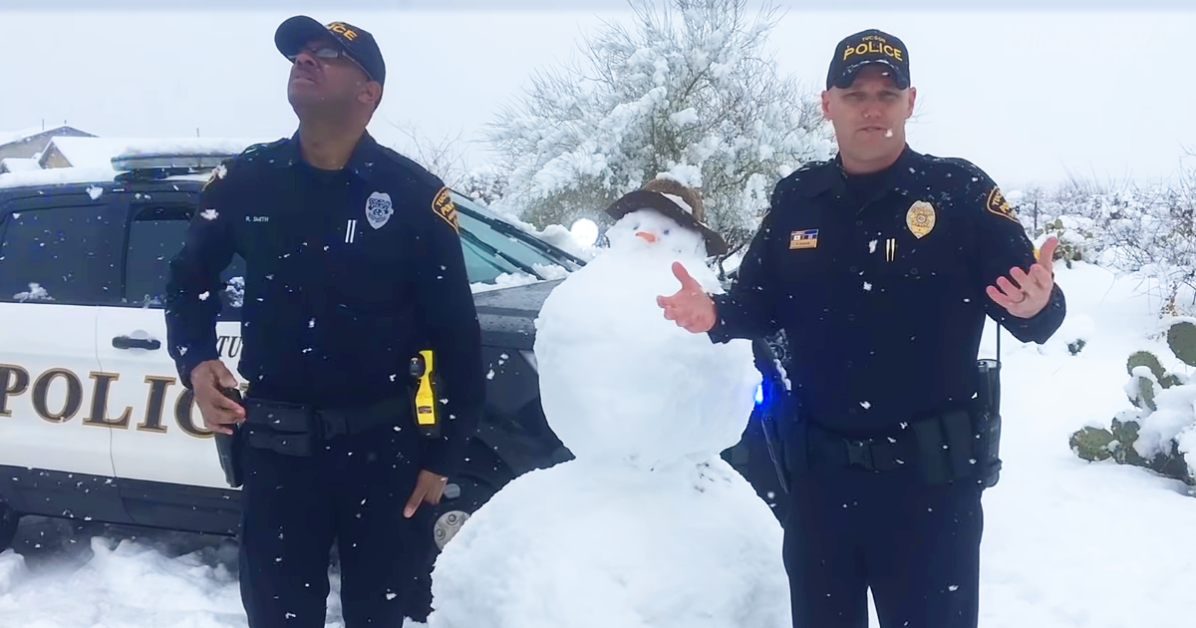 When you live in a town that isn’t used to having cold weather, getting any snow is unusual. In fact, in Tuscon, Arizona the last time it snowed was March 2013. So when Tucson found itself blanketed with a white powder after a rare snowstorm, these community-focused officers were sent to investigate the suspicious substance. In a Facebook post, the Tucson Police Department wrote:

“***BREAKING NEWS*** Tucson Police Department Investigating Suspicious White Powder on Tucson’s far East Side. Officers have been getting numerous reports of the suspicious substance from all over town. Now we finally have some answers for the concerned public. See the video below for information. Thank you and stay safe Tucson! 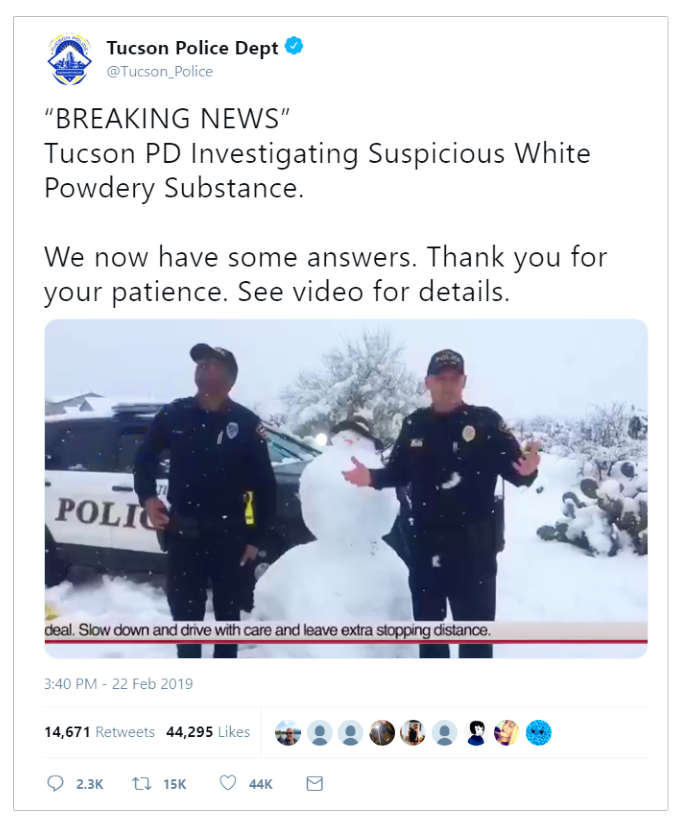 “As soon as we find out what this is we will let you know. Please don’t go out in this,” Sergeant P. Dugan warned, joking that the snow was burning his hands and gums. The sergeant pronounced the word “s ˈnau̇,” (rhyming with now, cow, and ow).

“The answer to the main question is, we don’t know what’s going on out here,” said Sergeant P. Dugan in a Facebook video posted by the department. “Tucson has never seen anything like this before. We’ve gotten lots of calls about a white powdery substance all over. We did have our crime lab out here just a little bit ago…”

“Some stuff we’re taking to the lab,” Sgt. Dugan added as another officer in blue gloves exercised could be seen scraping a small sample of the substance into an evidence bag behind him. “As soon as we find out what this is, we will let you know. Please don’t go out in it.”

“I was touching it earlier,” he said, touching the snow again with his bare hands . “We don’t recommend you doing this, but I can tell you this is burning — this is burning my hand right now.”

And of course, their video went viral overnight. The response to the Tuscon PD’s parody post has been positively overwhelming with one viewer commenting, “In my 66 years on earth I have not seen anything so funny in my life. You guys are amazing!” We concur.

Humor aside, the video was a brilliant public service announcement.  There were some serious, potentially life-saving safety matters relayed to the attentive public. Officer Dugan reminded everyone to drive cautious, carefully, slowing down, and allowing greater stopping distance between vehicles to avoid accidents.

A huge shout out to everyone at the Tuscon Police Department and all officers everywhere who work long hours and risk their lives on a daily basis to keep us safe. This video reminds us that cops are people, too — and they have a great sense of humor!

Share this hilarious moment with your friends and pass that smile along.