ORIGINAL STORY: It’s all too easy to ignore people in need. But if karma does exist, this story is a wonderful example.

Kate McClure of New Jersey was on her way to Philadelphia when her car suddenly ran out of gas. Although panicked, she was able to pull over to the side of the highway. She got out and began trudging toward the nearest gas station. Before she got very far, a man who looked like he was homeless ran toward her and yelled that she should get back in her car and lock the doors. A little while later, he returned, this time carrying a container of gasoline.

“I just got her gas to help her get back on her way. I didn’t think anything about it. I wasn’t expecting anything in return,” said the vet “That’s how I got the money to start with — from other people.  return the favor. I can’t constantly take and not give back.”

The good Samaritan who brought Kate the gas was a 34-year-old former ambulance driver named Johnny. He’d moved to Philadelphia for a job offer that ended up falling through and had been homeless for about a year. Incredibly, he’d used his last $20 to come to Kate’s rescue!

Kate was determined to return the favor, so she and her boyfriend drove out to find him every day for a few weeks, leaving some money, food, protein bars, and other supplies. They gradually learned more about him and even saw the pictures he’d posted on social media. As Kate recalled, “I looked through his pictures and thought ‘it could have been me.'”

They decided they had to do more than just give Johnny small forms of assistance; they had to help him get his old life back. The couple set up a GoFundMe page, hoping to raise $10,000 toward rent and relocation costs.

WATCH: Homeless man finds $10k check and returns it to owner… and this is how she repays him?!

After a quick $1,700 had been donated, they told Johnny what they were up to, bringing a bottle of champagne to celebrate. As Johnny said, “This completely changes my life.” But that was just the beginning. The story spread across the internet and the campaign eventually raised an astonishing $160,000.

UPDATE: McClure continues to visit Bobbitt, giving him money, clothes, food, and supplies. All in all, she has raised $365,000 for the vet. Together they are managing the donations to rent Bobbit an apartment, pay for his food, clothing, transportation and more. Today, the former homeless Marine is back on his feet. (Semper Fi.)

Kate also wants to say, “We finally surprised Johnny yesterday! As you can see, he is ECSTATIC!!! And it’s all thanks to those of you who have donated and shared. We still have not hit our mark, but as he said, just what we have now changes his life. We really appreciate the outpouring of support from this amazing community, and we hope that we can keep it going. Please continue to share and donate if you can. This smile is because of YOU!!!” 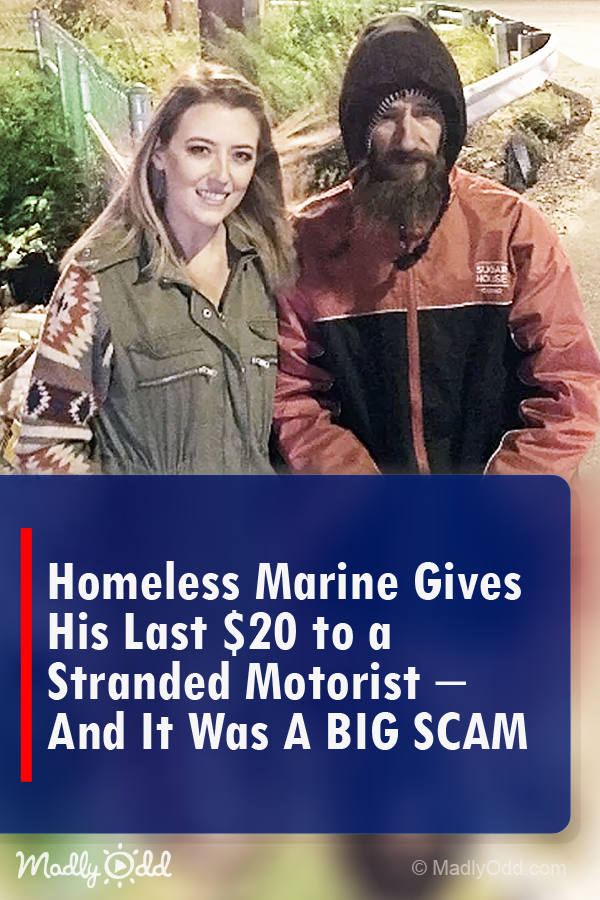