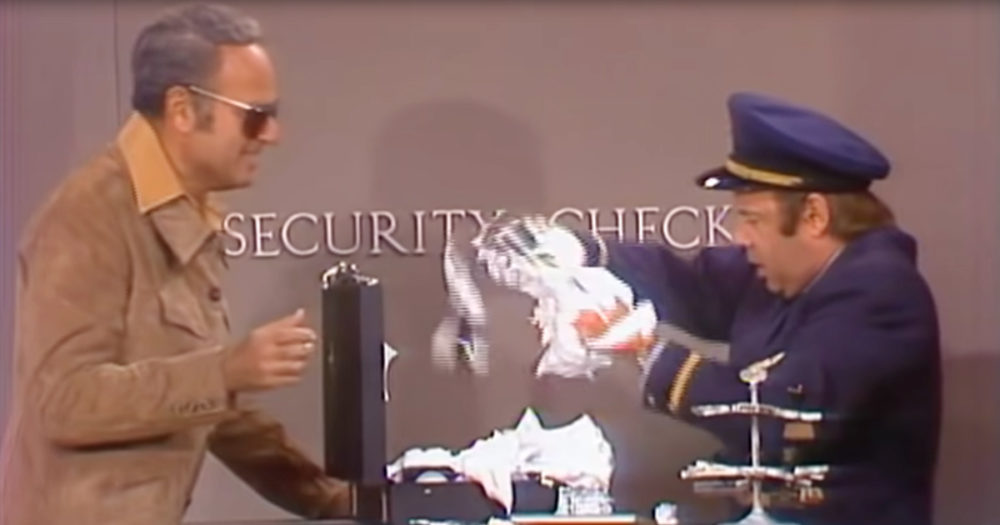 We had some of the best shows growing up. One of them was ‘The Carol Burnett Show’ of the 70’s, which took over The CBS network every Saturday night.

And as I look back on this ridiculously comic stint, one of the episodes always manages to give me Goosebumps, i.e. the ‘Airline Security’ debacle.

The episode revolves around a traveling filmmaker (played by Harvey Korman) who bumps into a security attendant (played by Tim Conway) for Speedo Airlines.

The skit opens up at Speedo Airlines with an announcement for “Flight #540” to Los Angeles boarding at Gate-6, and a number of passengers have lined to collect their boarding pass from the security attendant.

Then comes the turn of Korman and a series of ‘stamp work’ ensues. The stamp obsessed attendant stamps almost everything multiple times which Korman puts on the table. The chemistry between the two actors is so flawless that you automatically will get emotionally invested into the scene!

The next dialogue exchanges are regarding how the security attendant calculates the afternoon flight timing. Silly but effective. Masterfully executed, Conway then hits the “Restroom” punch line which to me is the highlight of the entire skit.

Then comes another jocular segment when he checks the traveler’s briefcase for anything harmful or explosives. “Any guns, knives, grenades? Anything at all?” to which Korman replies that the case contains only toilet-related articles along with a roll of film which he has been working upon for several years. Conway asks for the keys to open the briefcase which breaks off halfway in the case’s lock.

Further, he cracks the traveler up when he tries to drill through the briefcase in an effort to open it. What follows is a security fiasco as the attendant spills some shaving foam all over Korman’s suitcase which in turn, destroys all his recorded documentary films.

The Carol Burnett show is still as fresh, raw and hilarious as it first appeared back in the late 60’s. This is one of the many television shows from 70’s era that stands out as a classic show that never loses its original flavor.

Kudos to Harvey Korman and Tim Conway who hilariously portrayed their respective characters.

Do watch the video and let us know if Harvey Korman and Tim Conway tickled your funny bones too…!