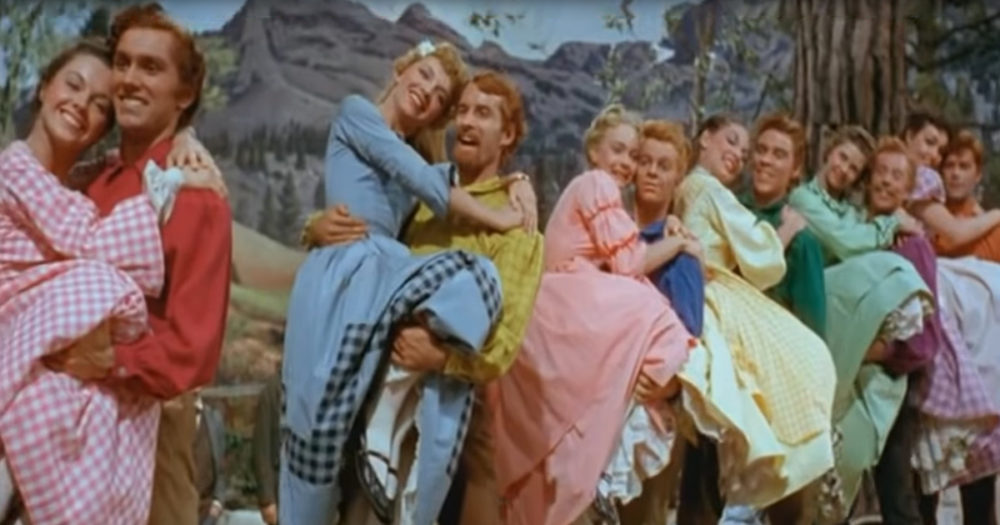 This dance sequence from ‘7 Brides For 7 Brothers’ is a testament to how talented actors and actresses were in the 50s! Actors could do it all back then: act, sing, and dance! This intense dance filled with intricate choreography and gymnastics must have been a grueling number to perform.

The film was known for the unusual choreography by Michael Kidd. He used mundane frontier pursuits, like chopping wood and raising a barn to create dance moves. The number was so technical and grueling that he wanted dancers to portray all six of Adam Pontipee’s boisterous brothers. However, MGM Studios wanted actors already under contract to MGM — Jeff Richards and Russ Tamblyn — to be cast as two brothers. The other four brothers were professional dancers — the four seen dancing on the balance beam.

The screenplay was based on the short story, “The Sobbin’ Women,” by Stephen Vincent Benét. ‘7 Brides for 7 Brothers’, is set in Oregon in 1850. A lovely young cook, Milly (Jane Powell), marries Adam (Howard Keel), a grizzled lumberjack, after a short courtship. The newlyweds return to Adam’s farm, where Milly is shocked to meet his six ill-mannered brothers.

She quickly explains to the men how to behave appropriately, including courtship etiquette. However, the brothers kidnap six local girls, the ones they dance with, in this scene! This barn raising sets off the chain of events for the rest of the movie. It is a fantastic film that any musical fan will love.