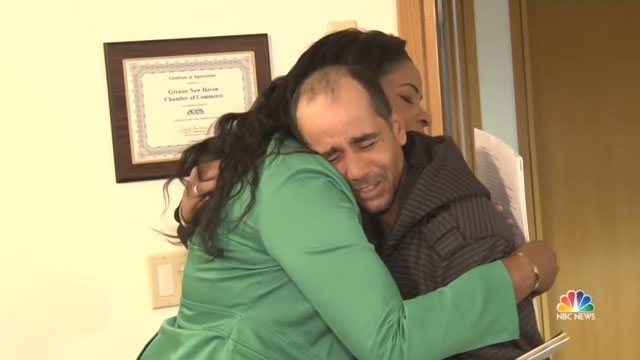 Roberta Hoskie, a successful real estate agent in New Haven, Connecticut was out running errands while also holding onto a check for $10,800. Somewhere near a busy intersection, it slipped out of her hand.

She didn’t even realize it was missing until later that morning when she got a call from Elmer Alvarez, the man who found it. When she met up with him so he could return it, she was astounded to discover that he was homeless.

She had some reward money for him, but afterward decided she had to do more for someone who was so quick to do the right thing despite his desperate circumstances.

As she said, “I don’t care what you say. There are so many really good people in this world. I don’t know who this guy is. But I dropped my check and he called — I didn’t even know I dropped this check — and he called me.” It took some detective work, but Roberta tracked Elmer down.

Roberta, it turns out, knew more about the challenges Elmer faced than you’d ever imagine. She had once been homeless herself, a teenage mom and a high school dropout. Someone had helped her get a fresh start and now she was doing quite well and even owned her own business — Roberta was the local newspaper’s person-of-the-year for 2015! She had always wanted to pay it forward and here was her chance.

As you’ll see in the video posted below, it was an emotional scene when Roberta told Elmer that she’d arranged housing for him, English classes as a way to “teach him how to fish,” and even offered to help him study up on the real estate business at her company’s office.

The one condition she attached to all this was that he, too, pay it forward when he has the opportunity.

What did you think of Roberta Hoskie’s way of paying it forward? We’d love to hear from you in the comments section below. Be sure to like and share this heartwarming story, too!