We have all seen some quirky friendships on YouTube videos before, the lion and the dachshund the pit bull and the deer, but I don’t think I have ever seen on relationship between two of the most unlikely creatures as these two before. Let me set the scene for you. Firstly there are two cats resting, you know, just relaxing the way that cats do. Not a care in the world, probably waiting for their man-servant to get them some food, and then, there is a tiny snail, just minding its own business.

Now the snail is on one of the cats paws, this doesn’t seem to be disturbing the cats well deserved rest and is pretty much being ignored. But the second cat becomes quit curious of their little visitor. Being the owner of three cats myself, let me re-phrase that, have the pleasure of serving three cats myself, that’s better, I could usually predict the outcome of such a meeting. I mean, I quite like snails myself, usually in a garlic sauce, But no, the cat is simply saying hello.

This video will amaze you, the cat and the snail seem quite happy with each other company. The cat sniffs the snail, the snail lifts up its head as if to acknowledge the furry-felines-affection. Meanwhile, the first cat is totally oblivious to what going on and is probably having dreams about its person doing exactly what they are told. At this stage the second cat starts to lick the snail, this is where I would be getting worried if I were the snail, but again no, the cat is just showing affection, to which the snail seems extremely happy about.

The snail, for the sake of this story, we will call it “Michele”…….get it……..mi shell….I know, bad attempt at humor. Anyway, Michelle seems to be lapping up all of this attention and again raises her head toward cat number two with not a care in the world. Cat number two once again licks her on the head and even appears to put Michele’s head inside it mouth, now if I were Michele I would really be getting worried. Again, cat number two is simply being nice and appears to have no intention of harming its little mollusc-mate.

Then unexpectedly cat number one wakes up and moves his paw away leaving cat number two surprised and Michele stunned. This video is wonderful to watch, and for those of you who may not be cat lovers, you may well change your mind after watching it. Animals are curious creatures, they can surprise you at any moment with their antics and play. A cat and a snail, best friends, who would have ever thought such a thing likely? 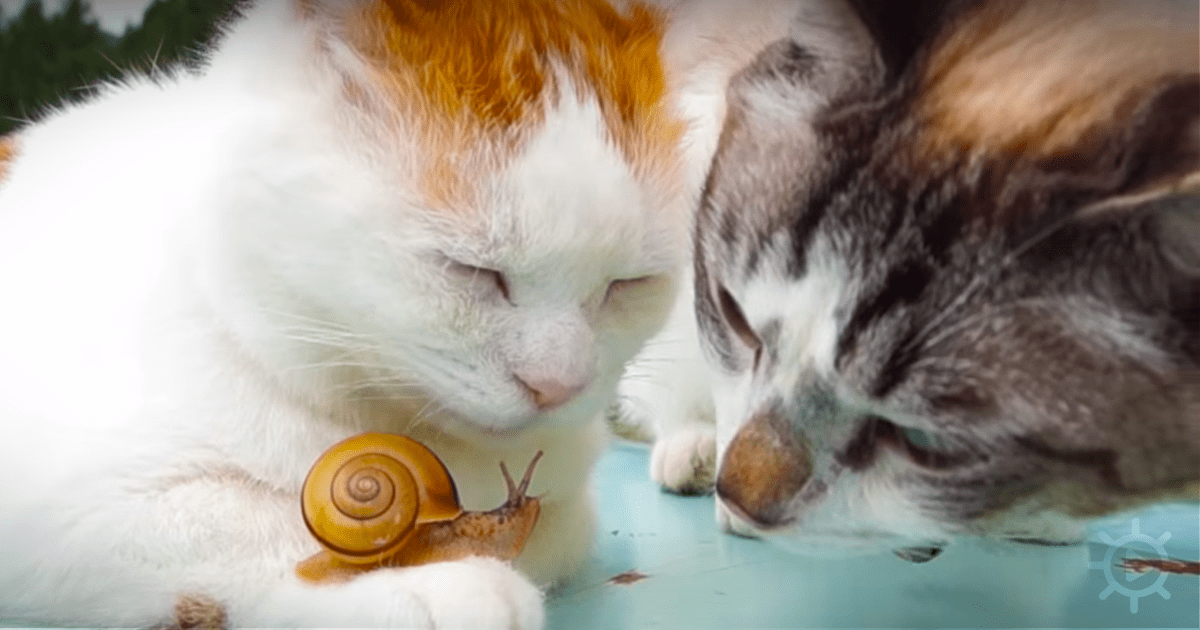