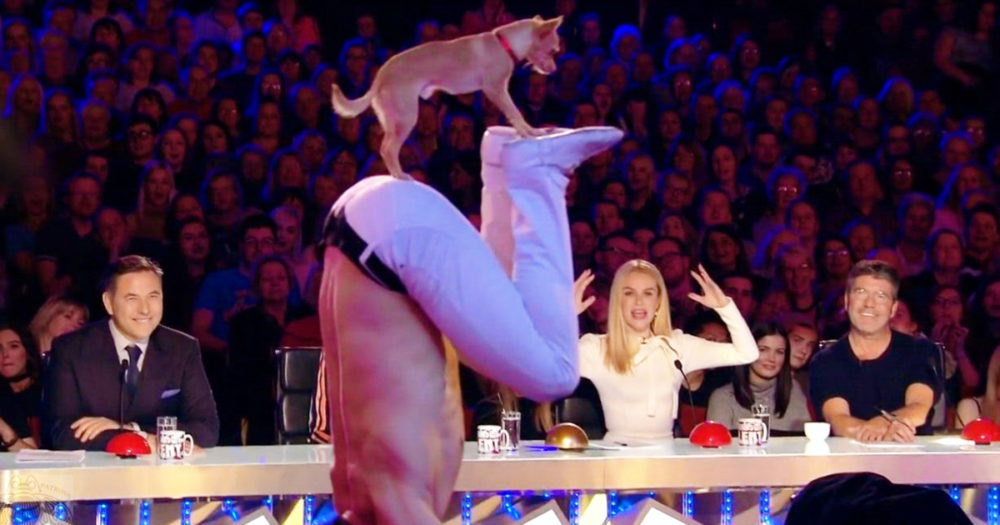 Finger balancing. Tumbling. Handstands. Does it all sound a bit too familiar? Don’t worry, once you’ve seen Christian and Percy perform you’ll realize it’s not just another gymnastics routine.

If there is a secret formula to getting through a Britain’s Got Talent audition surely it’s not to do yet another acrobatic act? But wait a minute, this isn’t just another acrobatic act (though Christian is a pretty decent acrobat it has to be said). This is the acrobatic dog act! And now, by introducing a Chihuahua called Percy to the act you have something totally different on your hands.

During the interview, it’s obvious there is a deep bond between Christian and his dog. The way it guards him by growling without any fear when Rory (twenty times the size of Percy) touches Christian demonstrates this clearly, and when we get to the act that bond and the underlying trust is put fully to the test.

It’s a clever act. Initially, Percy is not in sight, and the judges must have deep hearts thinking this is one more balancing, strength or tumbling show. David does get excited as the jacket comes off, but the real turning point is when Percy is called into action. The audience and the judges are wowed by the cuteness of a Chihuahua on the big stage, even Simon commenting “He’s a cute little dog”.

The actual act is fairly brief but Christian and Percy do enough rolling and balancing together to enrapt the audience and when we reach the end the praise is as much for the dog as it is for the human. Simon, still in awe of Percy commented “He’s adorable”, and Amanda said “I just loved it, I thought your act was fantastic”, but you really have to watch the video to hear how impressed David was, with Christian as much as with Percy:

Feedback online was similarly supportive. One review said “Simply love this act, could watch it over and over again, cheers me up”, and Christian obviously made an impression with another reviewer “Girl dream…….Six pack Guy with a cute dog… ”

Whilst wisdom holds you should never work with animals Christian has proven it wildly wrong on this occasion.