“O Holy Night” is a perennial Christmas favorite — its famous “O night divine” passage has always been a guaranteed show-stopper. Since it was composed, in France in the mid-1800s, the song has been part of Christmas for millions and millions of people the world over. It’s a piece of music that does well in expert hands and numerous recording artists have sung it, everyone from early 20th century opera star Enrico Caruso to Whitney Houston and Patti LaBelle. So why not Susan Boyle?

She’s world-famous today, but there was a time when Susan Boyle was a complete unknown. She was born in Scotland and faced a lot of challenges in her early years.

After she was misdiagnosed with a learning disability, everyone took it for granted that she wasn’t very smart. At school, she was bullied mercilessly. Little surprise, then, that she had some trouble finding her place in the world.

One thing Boyle had going for her was a tremendous innate musical talent. After some lessons from a good vocal coach, she was singing in choirs, at churches, and destroying karaoke at local pubs.

What changed everything for Boyle was appearing on “Britain’s Got Talent,” a hit TV show in which singers and other performers compete for fame and fortune. Her interpretation of a song from “Les Miserables” was nothing less than inspired. Within a few months, she’d already released her first album!

If anyone could deliver an unforgettable performance of “O Holy Night,” it’s Susan Boyle. As you’ll see (or hear, that is) in the video we’ve posted below, she starts low and soft and is soon joined by the angelic voices of the youth choir standing behind her.

Gradually, the momentum builds and the music gains incredible force and emotion. If you never understood why Susan Boyle is such a phenomenon, well, now you do!

Impressed by “O Holy Night” Susan Boyle style? Let’s hear from you in the comments at Facebook. Be sure to like and share so your friends don’t miss this musical tour de force! 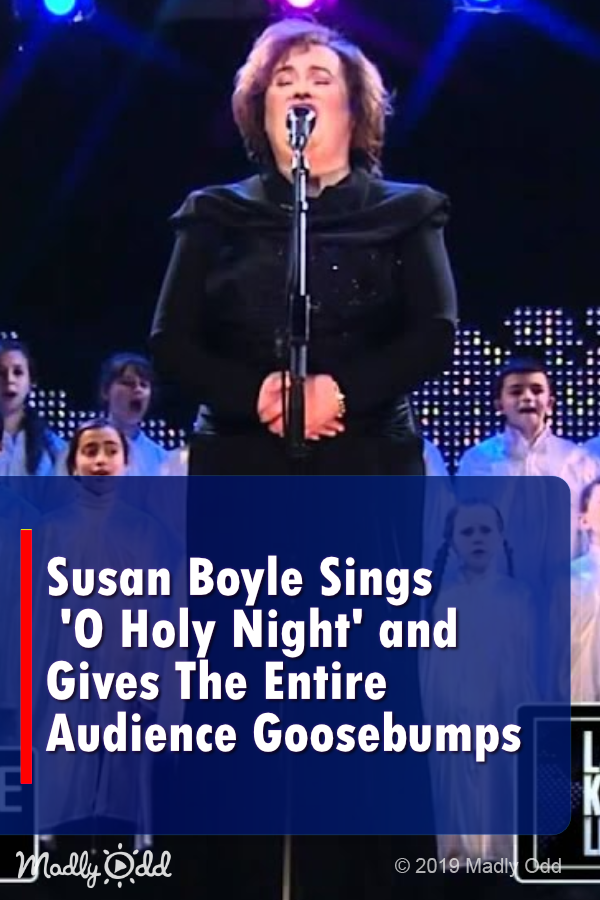