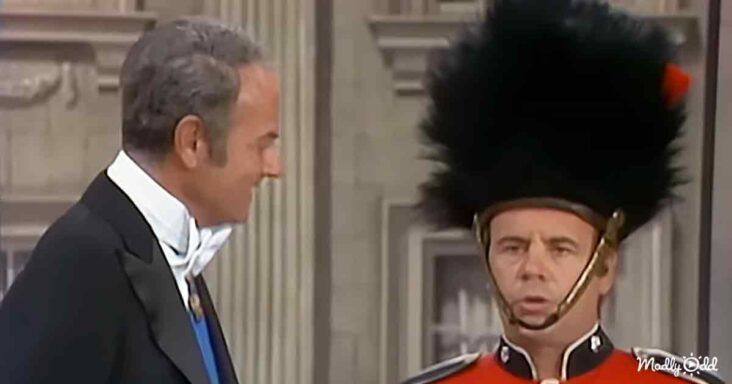 The Carol Burnett Show always featured hilarious skits about misunderstandings. The humor wasn’t even bound by American absurdity. In this classic sketch from season 9, episode 4, the setting is the United Kingdom. 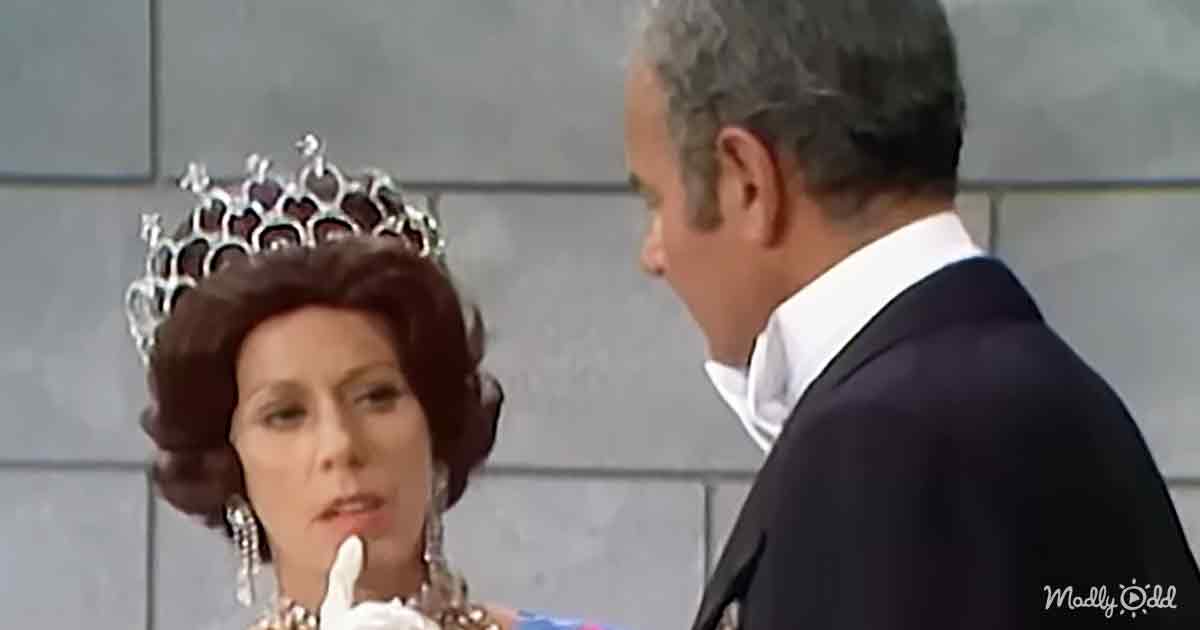 At Buckingham Palace, a guard, played by Tim Conway, keeps a strict watch on the open gate. He paces around with his weapon, wearing a royal guard uniform.

The King and Queen of England arrive. The Queen is played by Carol Burnett and the King by Harvey Korman. The Queen tries to enter the palace, but the guard blocks her path.

The Queen demands he stand aside. The guard says he can’t let her inside. ‘But the King and me live here,’ says the Queen.

The King calls the Queen over to him for a moment. He whispers something into her ear. ‘But the King and I live here,’ the Queen corrects for the guard.

The guard doesn’t believe them. He says he can’t let them enter if they don’t have the password. ‘But I am your Queen,’ says the Queen.

The guard looks down for a moment, thinking. He then looks back at the Queen. He tells her that’s the wrong password. 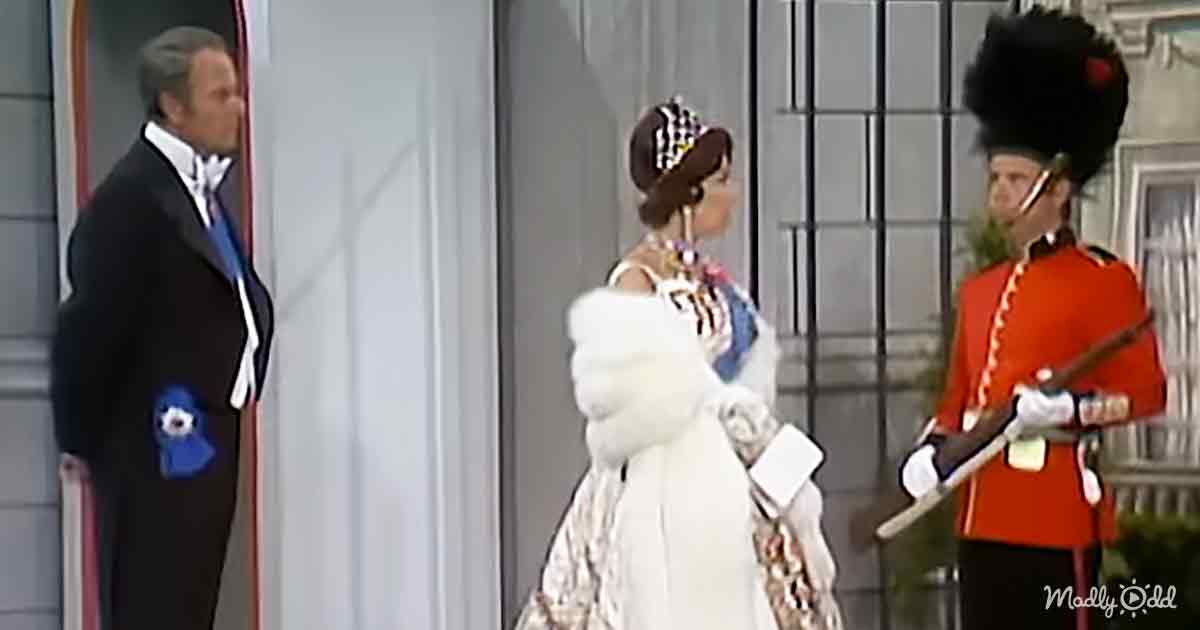 The Queen tries to step forward. The guard blocks her. He threatens to put his entire gun in the woman’s mouth if she doesn’t step back.

The King calls back over the Queen. He asks what the guard says, and she repeats. ‘I’d like to see that,’ says the King.

The Queen returns to the guard and repeats what he says. She stops herself midsentence and stares back at him.

The Queen tells the King to speak to the guard. The King tells the guard that the Queen has to get to the throne. ‘No password, no throne,’ says the guard.

The King returns to the Queen and asks how they got stuck with such a guard. The Queen mentions how the guard called the post for his extreme heroism.

The Queen assures her King that the guard has no internal organs. She proves this by going up to the guard. She opens his mouth and says hello inside it. An echo can be heard.

The King is astonished. He commends the guard and says he’ll reward him. The King awards the guard a shilling.

The guard refuses, telling the King to stick it in his ear. The Queen then calls over the King. She asks what the guard says, and he repeats.

‘Don’t do it,’ says the Queen, regarding putting the shilling in his ear. The Queen then tries to convince the guard. She commends him for not accepting a bribe.

The guard then admits he wants a popsicle instead. The Queen repeats this to the King, precisely as the guard said. 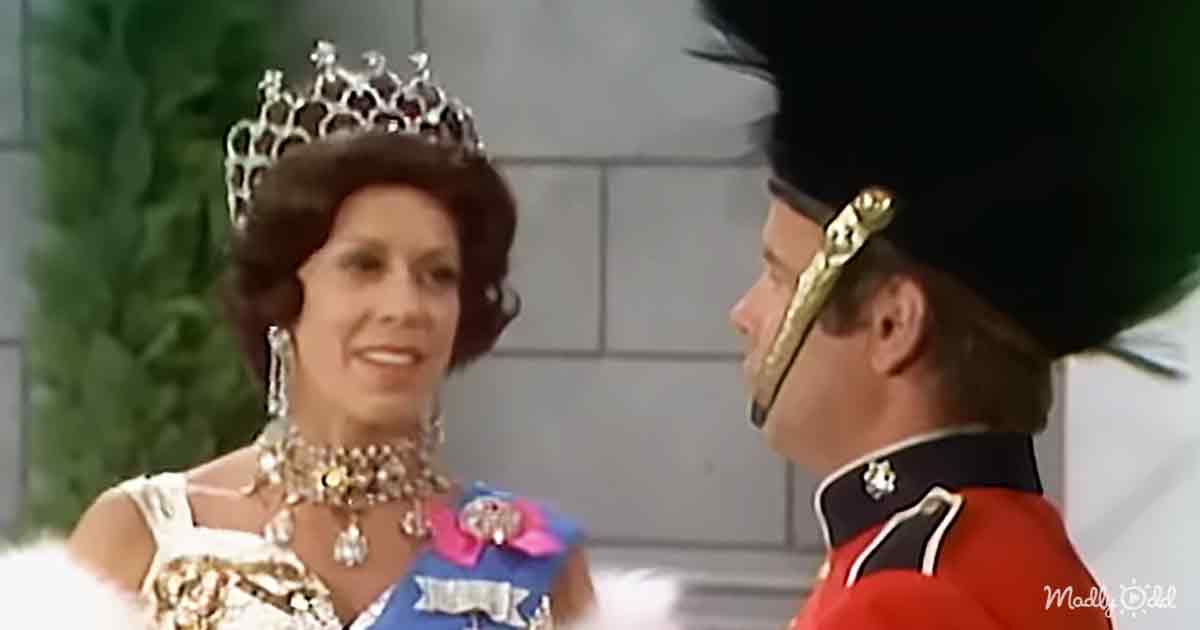 The King finds this preposterous and says there’s no way they’ll find a popsicle. At that moment, an ice cream salesman stops by. The Queen calls the salesman over.

The Queen orders a popsicle. The seller asks what flavor the Queen wants. The Queen then asks the guard what flavor he wants.

‘Buffalo,’ replies the guard. The Queen relays this odd request to her King. She then asks the salesman for a buffalo-flavored popsicle.

The seller says he doesn’t have that flavor. He says there’s no such thing. The Queen tells the guard that a buffalo popsicle doesn’t exist.

The guard decides to order a double-decker cone instead. The scoops for that cone he wants are antelope-sherbert and goat-hoove ice cream.

A frustrated Queen tells the guard he’s out of his mind. She then explodes with anger at him. The Queen goes on a long rant about how absurd the guard’s demands are.

The Queen stresses the ice cream flavors that are real. She even yells down his throat for another echo. The audience applauds and laughs.

The King, looking inside the seller’s ice cream cart, finds a buffalo popsicle in the back. The guard goes to have a look. The King then kicks the guard into the ice cream cart.

With the path cleared, the King and Queen enter the palace. The English anthem plays as the ice cream cart rides off the stage. The audience claps at another successfully hilarious sketch.