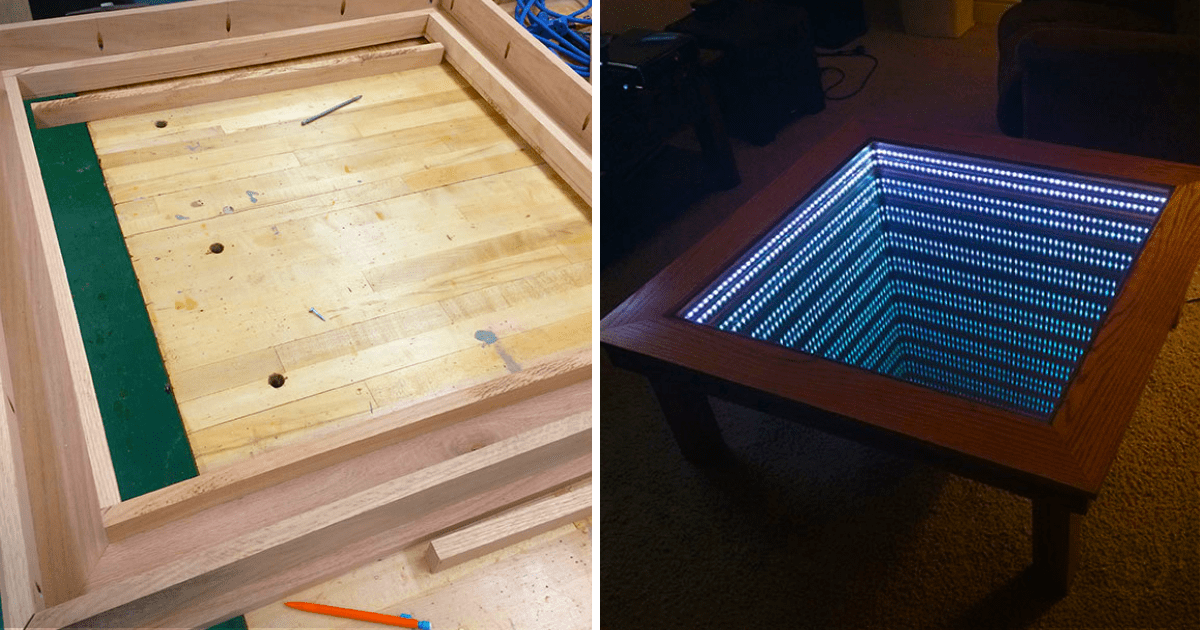 If you took shop class when you were in school, chances are you didn’t make anything particularly impressive. It takes a lot of skill and experience to turn raw materials into something nice, even a simple piece of furniture or a birdhouse. You have to mentally break the project down into pieces, then deftly use tools to make the pieces, and finally bring the whole thing together. The typical teenager doesn’t have the necessary skill, to say nothing of the experience! There are always exceptions…

This creative 15 year-old came up with an excellent project for shop class, but what’s really amazing is how well he turned that idea into reality. He calls it an “infinity table.” At first it looks like a normal glass-topped coffee table, but when you flip a switch, lights come on and a pair of trick mirrors create the illusion of lights going off to infinity (it’s like what happens when you hold two mirrors facing each other). He posted pictures of the table and the process of making it on the internet and received a huge number of positive comments, especially from fellow DIYers who were highly impressed by his work.

He began by making a wooden frame to which he attached blocks of wood that had been jigsawed to hold the legs. He made a second frame to put on top; it looks kind of like a picture frame. To make the wood look good, he used “the stain my teacher recommended, and since he’s the boss, I listened. Really liked the natural color it gave and how it brought out the grain.” Next up: doing the wiring and installing a strip of LED lights around the inside of the lower frame. One trick mirror goes on the bottom of the lower frame while the other rests on the upper frame, with the lights in between. There’s scarcely more than an inch of space separating the mirrors, but when the lights are on, the effect is deep!