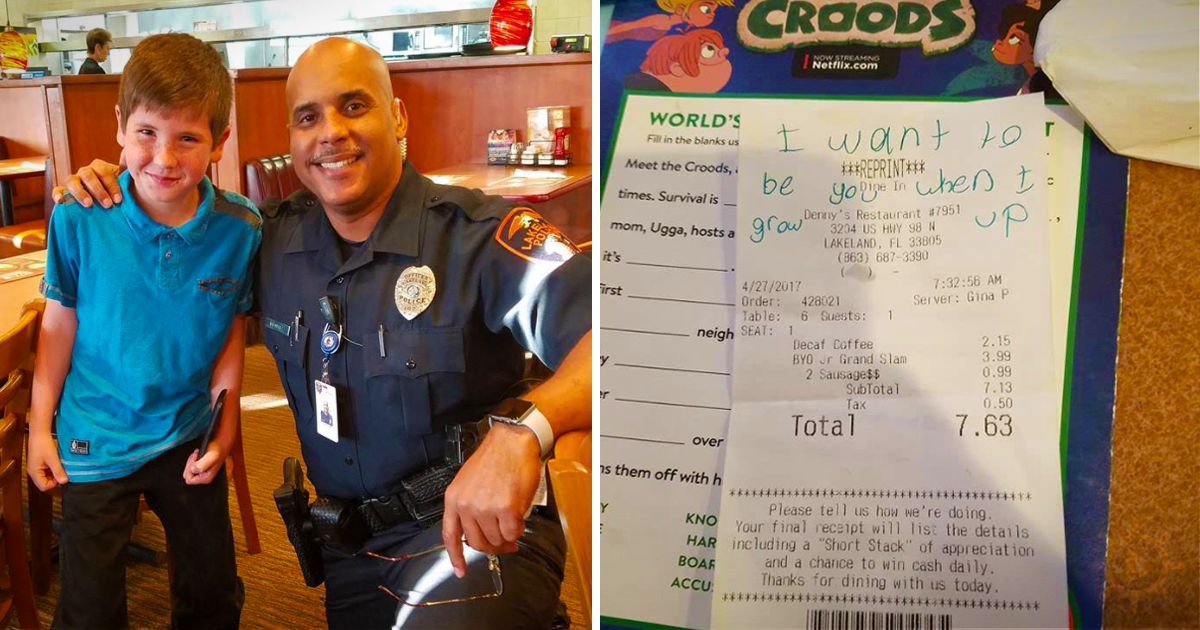 A 9 year-old boy named Noah was enjoying a breakfast at Denny’s with his mom when he saw a police officer sitting at a nearby table. His dream was to become a police officer himself, so he asked his mom if he could go over and say hello. Naturally, she told him that was fine. Still, Noah was nervous, so much so that when he got near officer Eddie Benitez, he wasn’t able to say anything.

Noah soon came up with a new and even bolder plan, one that would literally make the officer jump out of his chair. The boy had set aside some of his birthday money and now wanted to use it to pay for Eddie’s breakfast! His mom thought this was a great idea, so she waved over the waitress and explained what her son had in mind. After paying Eddie’s tab, Noah jotted down a message on the receipt: “I want to be you when I grow up. Thank you for your service, Noah.”

Eddie was a bit surprised to see the 9 year-old boy bringing him his receipt, but once he saw what was written on it, he instantly understood. The officer indeed jumped out of his seat and suggested the two of them pose for a photo.

The officer was so touched by Noah’s gesture that he carries the receipt with him every day. As he told a local TV station, “It meant everything. It meant that I’m supposed to wake up every morning and put on his uniform and go out there and do what I do. You know? It means that I need to keep trying to be a good example to all these young guys.” As for Noah, he wants to be a police officer more than ever!

What did you think of this youngster’s incredible way of thanking and honoring a police officer? Let us know in the comments at Facebook and be sure to like and share!