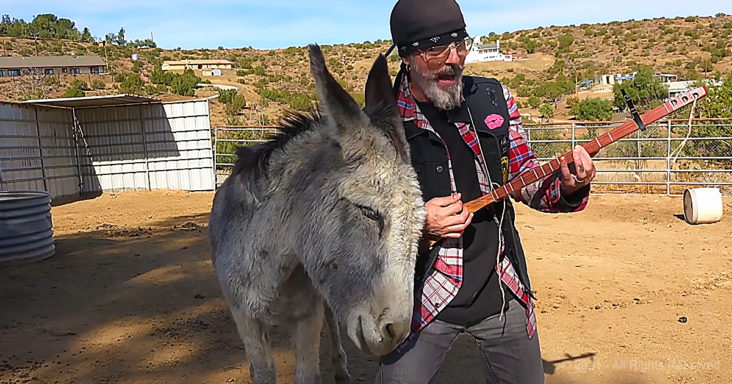 Music is a mostly foreign concept to animals, but that doesn’t prevent some of them from appreciating it. This donkey named Hazel seems to have a soft spot for The Beatles.

Christopher Ameruoso has been in and out of the music business most of his life, spending time in a band that shared his last name and playing something called Swamp Rock Music.

When you put in that much time with music, it’s only a matter of time before you have a catalog of songs in your head and your hands that you can pretty much play on demand.

Like any craft that becomes a part of your life, if you suddenly stop doing it, you almost don’t know what to do with yourself.

Ameruoso here finds himself playing music for his beloved donkey Hazel. Because why not? Musicians don’t need a reason to play. A donkey is as good a reason as any.

Judging by the way that Hazel reacts to Ameruoso’s playing, it’s a safe bet that she loves him and the music he plays. When she hears a Beatles tune coming out of that guitar, she presses up against him lovingly.