Darrick is a volunteer at an elephant sanctuary. Over the years, he’s built up quite a rapport with his enormous friends. There’s trust involved, and not just on the elephant’s side.

Amazing though elephants are, if a herd of them were thundering toward you, you’d probably start wishing you were someplace else.

But then, you aren’t Darrick, a volunteer at an elephant sanctuary in Thailand who knows his way around pachyderms.

The Elephant Nature Park is near Chang Mai, in northern Thailand. Its specialty is the rescue and rehabilitation of elephants, although they also work with other animals. Their mission also includes working to save natural habitats from destruction and conducting educational outreach.

The Park was founded by Sangdeaun Lek Chailert, a remarkable woman whose decades of work on behalf of elephants has won her much-deserved international renown. She grew up in a village in the same region, and she learned quite a lot from her grandfather, who was a traditional healer.

The people who came to him sometimes brought sick or injured animals, and he encouraged his granddaughter to help out with them.

Darrick is a favorite of the elephants at The Elephant Nature Park, and of course, they always get excited whenever he visits. They treat him like he’s one of the herd, which isn’t surprising given that elephants are highly social and have an emotional intelligence that’s on par with our own.

Darrick has worked with the Park’s elephants for years, helping them to overcome trauma and develop into healthy, happy pachyderms. They all love him for it and insist on playing, cuddling, and belly rubs.

One elephant, in particular, named Kham La, is clearly Darrick’s number one fan. In the video posted below, you’ll see Darrick at the edge of a field calling out Kham La’s name.

In the distance, you can hear a sudden outburst of elephant noises, including the obligatory trumpet. A short time later, Kham La and several other elephants come thundering toward Darrick, stopping short and offering him trunk hugs.

Wowed by the rapport this volunteer has built with his elephant friends? Let us know in the comments section below and be sure to like and share, too! 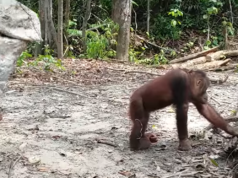 Hilarious orangutan has silly trick for getting attention 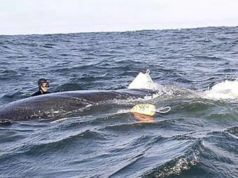 Whale trapped in net does amazing ‘dance’ when freed!