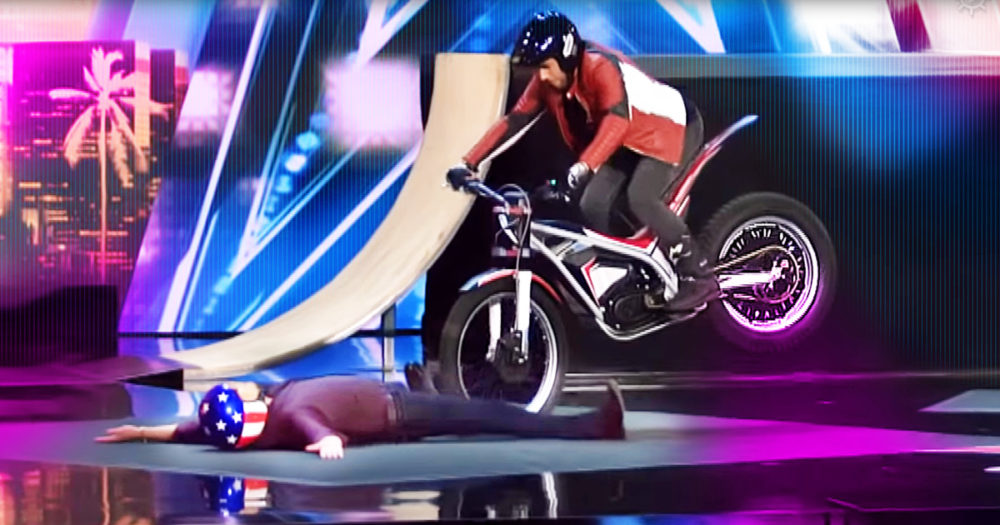 These are the acts that make AGT great. Something dangerous and out of the ordinary. If I was Howie, I think I would’ve had a heart attack on stage.

The thing I like most about ‘America’s Got Talent’ is that the talent come to America instead of America having to go to the talent. by that I mean we get all kinds of acts from all over the world come to this country to entertain us. Likewise, we also get our own homegrown variety of entertaining talent from right here in America. I think we’re quite spoilt as Americans and I love it! We get the best of the best from everywhere. Take for example this act.

On Tuesday, June 26 episode of “America’s Got Talent,” motorcycle Kenny Thomas had everyone on the edge of their seats when he almost killed Howie Mandel. Now, this act came to ‘America’s Got Talent’ direct from Paris, France. Let me preface this by simply saying that I have not one who is easily amused by daredevil stunts. I don’t know, call me a party-pooper, but I know that usually every “stunt” is performed within very safe bounds and so therefore without the element of risk, I find most stunts quite boring. Such “safe” acts don’t hold my attention for long.

The act you are about to watch is a very rare exception. I’m sharing this with all my friends because it simply is absolutely breathtaking at it does not get your heart beating, you might wanna check your pulse to make sure you’ve got one.

Kenny’s audition begins quite innocently like all acts. The Contestant walks out on stage and the judges ask questions. We quickly learn that this handsome gentleman is from Paris, France and he needs a volunteer in order to perform his act. We don’t actually know what the act is yet. All we know is he needs a volunteer — and of course the best volunteer to choose whenever you need one is lovable Howie Mandel. He always gets suckered into it somehow. He’s a good sport. I like him.

Howie Mandel walks up on stage. still not knowing what is about to happen color The young daredevil straps a helmet on Howie’s head and tells him to lie down on the stage floor. He looks at the Frenchman incredulously and asks, “What’s going on?” Again we still have no idea what’s going to happen. Then the daredevil walks off stage and we suddenly hear the vroom vroom of a motorcycle engine. The camera cuts to the audience and we see mixed expressions of shock awe and horror…

To attempt to describe what happens next is simply impossible. I could not do this act of justice by describing what happened, I can only try and ask you to forgive m blunt technical description. Here goes: Kenny does a flip on his motorcycle and then slides toward Howie doing a wheelie, stopping just before hitting his body.

Howie stumbled back to the judge’s pit clearly shaken after the act, Simon said jokingly: ‘Kenny, I’ve just been told there was a fault on one of the cameras so we’re going to have to do that again.’ Howie went pale!

Needless to say, the audience loved it and all four AGT judges Simon Cowell, Mel B, Heidi Klum, and the unwitting volunteer, were agreed the act must go on. With Kenny’s promise that future performances must include dangerous acts with “Volunteer Howie” as he is coming to be called, Simon kicks off what turns into an avalanche of YES votes and accolades. “Look, Howie, I’m glad to say after that act you’ve still got balls. I think this is exactly the kind of act we should have on ‘America’s Got Talent.’ Thank you for coming over from France.”