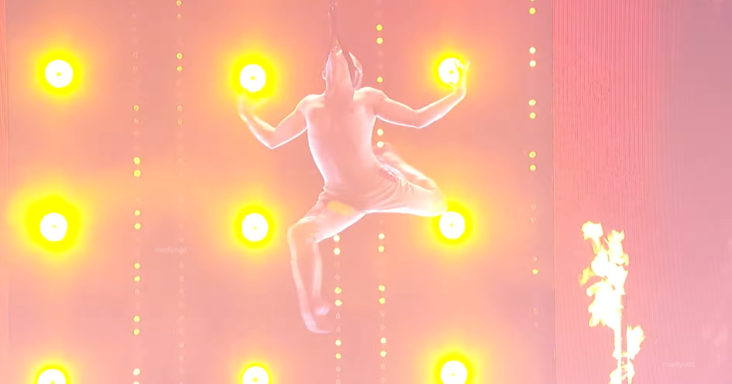 Out of all of the performers on this season of America’s Got Talent, few have garnered the attention of fans the way Aiden Bryant has. This time the self-taught teen aerialist dazzled everyone with his high-flying death-defying acrobatic dance.

This wasn’t Aiden’s first time on the AGT stage. When he auditioned, he quickly became a fan favorite for his incredible physical skill and charm. But as any good performer knows, it takes more than looks. You have to have star power. Aiden has that in spades.

For this performance, he used a three-ring metal globe to propel himself into the air to perform a beautifully intricate sky dance, but this time with smoke, mirrors, music, and fire!

The judges were held spell-bound and finally got a chance to put their amazement into words. The newest judge to join the AGT panel is Sofia Vargas, who exclaimed it was just like watching a Vegas show. Perhaps she hints at Aiden’s prospect of becoming the Season 16 champion, with one of the prices being a gig in Las Vegas.

Moody Howie Mandell wasn’t impressed by Aiden’s previous acts, but this time he was totally wowed this time, finally admitting to himself that Aiden has come a long way.

Simon chimed in by saying how impressive Aiden’s act was given the fact that he is self-taught and just 16-years-old. This young man is going places. Just watch!