For those of you who don’t know it yet, Singer come actress “Demi Lovato” is not only extremely talented, but also has a very well-kept secret. This dynamo can do impersonations of other singers without, it seems, too much effort. Many of us saw her growing up on the television sets of the Disney Channel, where she played a girl who was pretty much like herself. Everyone could see that she was a very talented actress, but the world had not seen the vocal talent she also possessed.

Not many people know this, but she comes from a talented family. Her mother was a country singer and Dallas Cowboys dancer, her sisters were also actresses. She grew up on the sets of Barney and Friends, where she became one of the series favorites. Her vocal talent started to surface back then, but it would be until she founded a record label along with one of the Jonas brothers that she would show the world what she was really about.

Fans of “Jimmy Fallon’s” tonight show were in for a fantastic surprise when Demi was invited to compete in his “Wheel of Musical Impressions” segment. Others that had been contestants such as “Jamie Fox” and “Adam Lavine” would have been hard pressed to match Lovato’s stellar performance. To many people, she only was a talented singer, and were not aware of Demi’s impersonation talents. But that day would the one, where everyone, including Fallon, would be in for a treat.

Her first challenge was to imitate “Cher” a task that she took in her stride. There were no nerves for this young singer to deal with. Now Jimmy is no slouch as well and he certainly kept up to the challenge with some very good impressions himself. But when Demi pulled out her take-off of “Christina Aguilera” she not only blew the crowd away, but also a very impressed Fallon.

I don’t think too many people could image “Aguilera” singing the theme to “SpongeBob SquarePants” let alone pull it off with such confidence and ease as Demi did, but she did it so well that she was rewarded with a standing ovation from Fallon whose only words were “That’s it, Game over”. The audience were in raptures as were the band.

This young lady has had some ups and downs in her life, but she has come through all the adversities life has thrown at her with all the confidence of someone much more mature than her 25-years. With the release of her 6th album this year, this remarkable talent will certainly be with for the foreseeable future, a shining star for us all to enjoy. 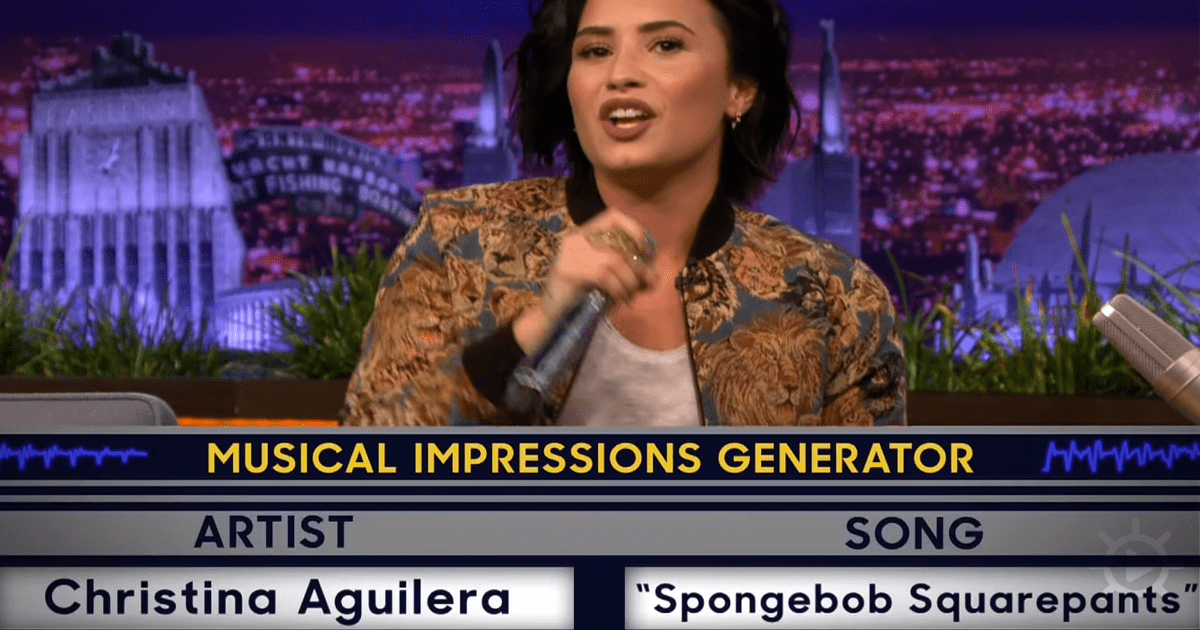 Click the link below and be amazed by her very well hidden talent.