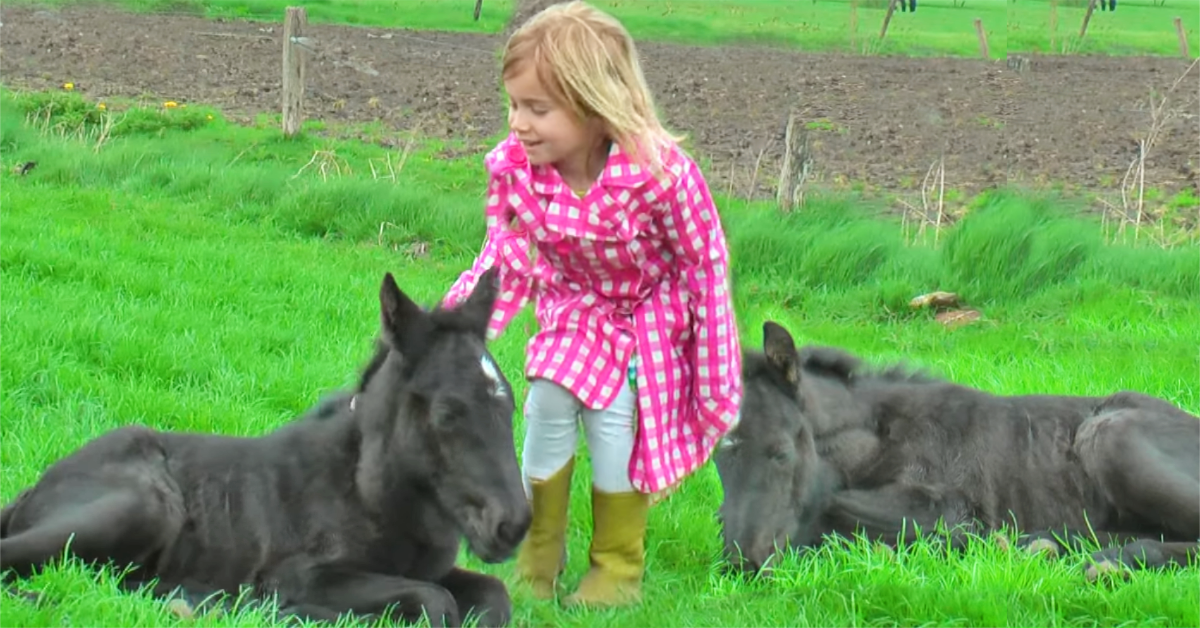 The bond between brother and sister is always sacred. As sacred as it is for mother and children. It may just take them a bit longer to realize this bond, but with time, this is a lesson that isn’t best when rushed. Yet this mother really does have some beautiful children and man when you see them you will be left breathless. I know I was sure speechless by the beautiful babes!

In much of the animal kingdom, multiple births are quite normal. A cat, for example, might typically have four kittens in her litter. There are breeds of dogs that frequently have ten puppies in one go. Even for humans, who generally have only one baby at a time, twins are not a rarity.

But with horses, it’s a very different story. A mare’s anatomy really isn’t able to accommodate more than one foal and not surprisingly, nature arranges things for horses such that it’s almost always one baby at a time.

It’s quite unusual for a mare to be carrying twins and what’s flat-out rare is when everything goes well, with mom and both kids healthy and happy. In this case, it’s a special treat: a handsome and mighty draft horse gave birth to a pair of adorable foals.

The horses in question are Friesians, also known as Belgian blacks (even though Friesia is a long way away, in northern Holland). The breed dates back at least to the middle ages and Friesians were once highly prized war horses, being both large and strong enough to carry a knight clad in heavy armor. These days, Friesians are a lot more likely to be found at a dressage event or on a movie set than on a battlefield.

As you’ll see in the video posted below, mom and her babies, named Lisa and Fien, are doing splendidly just four days after they were born. Foals have the incredible ability to stand and nurse within an hour of being born and just a few hours after that, they’re already able to run alongside their mom.

In the video, you’ll also meet a very young equestrian who obviously loves these little ponies. This little girl knows her way around horses obviously. Despite being so large and strong, Friesians are notably gentle and affectionate, as you can see by the way they readily accept pets from a little girl. Please note the child approaches in clear view of the mother. The mother smells her first then she approaches the foal.

This massive horse gave birth to the most beautiful Belgian foals.  Their coats and manes still scruffy from their youth, as you see the future- the mother ahead of them. Her coat long and well kept. Her mane shines luxuriously in the breeze. Calm and majestically flowing as she eats the bright green grass. Grown beautifully for the very horse who grazes on it.

The two foals are still proving how spry they are. They gallop about trying to follow mama in all her travels. They prance and trot about without a care in the world, only stopping to eat or rest their weary little four-year-old legs. Their legs almost made their adult versions of themselves.

They try to keep up with Mom who doesn’t let the distance get too great between them. Something seems to be different about this. Yet when you see them, I couldn’t believe what they did!

What did you think? I couldn’t get over how precious these beautifully dark-coated angels flaunted about their looks. We’d love to hear from you! Please leave a like for us on Facebook, share this video with a friend or family member, and don’t forget to tell us your thoughts in the comment section below. We Appreciate You!