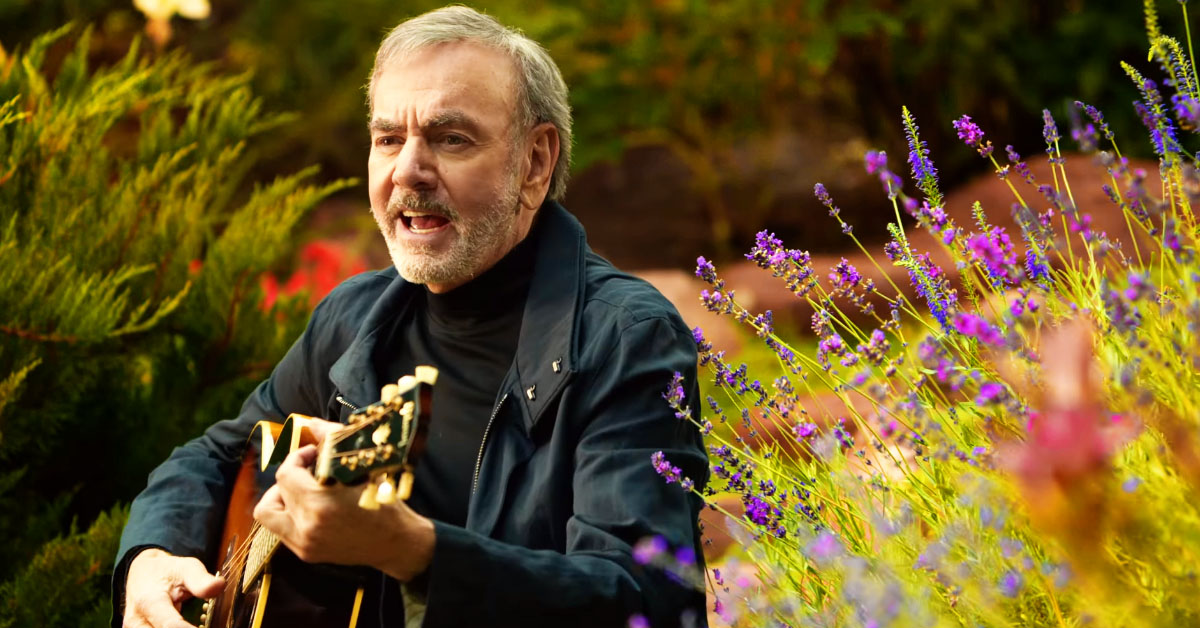 Neil’s song is exceptional and I love how his music is so at ease with the world with significant overtones of love and caring. This is classic Neil Diamond like you remember him.

You might never guess it, but legendary songwriter and musician Neil Diamond grew up as a poor kid in Brooklyn, New York. However, four years of his childhood saw a break from the gritty streets. When his father joined the Army, the family found itself living in a very different setting: Cheyenne, Wyoming! This undoubtedly influenced his later work. Later, back in Brooklyn, Diamond took part in choral activities at his high school along with a fellow student by the name of Barbara Streisand! He was also a budding poet, a talent that would serve him well when he became a songwriter.

On his sixteenth birthday, Diamond received a guitar, and the rest is history! He signed his first recording contract in 1962, but there were still some very lean years ahead. Diamond wrote his songs wherever he could, even while riding city buses. But for someone with so much talent, it was inevitable that he’d eventually make it big. Diamond’s career finally took off in 1966, and he soon became a major star. Since then, he’s sold well over 100 million albums!

Diamond’s work spans many genres, including pop, rock, folk, and even country. His hits include songs like “Cherry, Cherry,” “Kentucky Woman,” “Sweet Caroline,” and “I’m a Believer.” His career spans more than half a century, and he’s still going strong even though he’s now in his mid-70s.

“Something Blue” was released in 2014 and shows that like a fine wine, Neil Diamond only gets better with age. In the video posted below, Diamond performs the song amid stunning backgrounds: forests, meadows, colorful wildflowers, hills, a country road, and a dramatic rocky outcrop. Oh, and there are puppies, too! It’s an uplifting song about finding love, and we’re sure Diamond will have you saying goodbye to any blues you may have.

Everybody loves it. One fan said, “Isn’t this the happiest song? It truly reminds me of my rescued puppy. I never knew I was so Blue until this friend came into my life and changed my life for the best. She opened my eyes, and a light came through. She showed me a love I never knew. Thank you, Neil Diamond, for such an awesome happy song.”

I have never heard a bad Neil Diamond song. He gets better with age.  What talent he’s been blessed with! Are you a fan of Neil Diamond? Let us know in the Facebook comments. Like and share so your friends can discover this great musical artist.