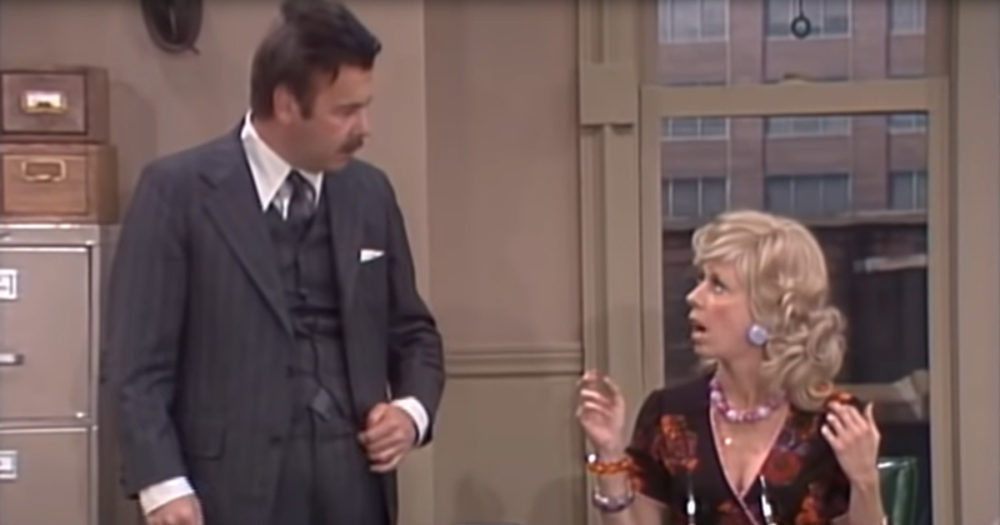 The 70s were the golden years of my life. I can’t quite figure out if it was simply because of my childhood or The Carol Burnett Show, which made it so. I suppose it’s the latter.

I still reminisce about those Saturdays with my whole family, everyone abandoning the task at hand, and settling in front of the TV screen just for The Carol Burnett Show.

This hilarious episode is one of the many Mrs. Wiggins skits, performed masterfully by Tim Conway and Carol Burnett. Conway portrays the character of Mr. Tudball who is desperately trying to get his assistant “Misses-Uh-Wiggins” (Carol Burnett) to help him on an important meeting but can’t seem to be able to divert her focus away from her drying nail polish.

An amusing fact you might not have known is that the Mrs. Wiggins skits were created by Tim Conway after the show’s office secretary, Charlene, would constantly press the wrong button on the intercom.

Conway also originally wanted the Mrs. Wiggins character to be old and forgetful in order to add to the comic quotient. But the show’s costume designer Bob Mackie is one who we need to thank for creating the iconic dimwitted Mrs. Wiggins the way we now know her to be.

The episode begins with Mr. Tudball calling his assistant into the office over the intercom. But Mrs. Wiggins fails to respond because of; you guessed it right, her drying nail polish.

The Romanian accent in which Mr. Tudball says “Mrs. uh-Whaggins” will launch you in a barrel of laughs every time, and mind you, he says it a lot, so prepare to laugh till your stomach hurts.

After he finally manages to get her inside his office and starts explaining the task, Mrs. Wiggins appears to be as careless as ever, chewing her gum and waving her hands.

This is when the funniest thing happens. When Mr. Tudball says, he does not want anyone in his office before noon. Mrs. Wiggins looks at her watch and walks away. The audience can be heard going wild with laughter when Carol performs her distinctive “Wiggins walk” sticking her behind in the bagging part in the back of her skirt.

Throughout the sketch, the primary source of comedy is how Mrs. Wiggins manages to rile up Mr. Tudball in ways unimaginable. The episode hits another peak when Mr. Tudball finally loses it and calls Mrs. Wiggins “Straw head.”

I won’t give you any more spoilers but if you haven’t seen the part where Mr. Tudball and Mrs. Wiggins exchange places and imitate each other to deliver the perfect ending, then yourself prepare to mark this episode as your new favorite.

“My parents and I used to watch this show every week. My dad would cry because he laughed so much” commented a fan.

“The bar I went to, would shut off the jukebox and turn up the TV when Carol Burnett came on” recalls another.

Watch Tim Conway and Carol Burnett’s amazing comic chemistry in this iconic video, and let us know which part of it you found to be the funniest. Enjoy!