Tigers are one of the most impressive of nature’s creations. These big, gorgeous striped cats are mainly found in India and Southeast Asia. Unfortunately, they’ve become an endangered species, mostly because their habitat has shrunk dramatically over the last 150 years. Tigers have a reputation for ferocity — and any tiger deserves a lot of respect — but as you’ll see in the video posted below, they have a tender side.

Life’s beginning is an incredible and beautiful event. BBC Earth managed to capture some amazing footage of a mother tiger giving birth for the first time. Giles Clark is the Head of Big Cats at Australia Zoo. This fearless tiger expert was nearby, ready to help out if need be.

Clark needn’t have worried: this tiger’s powerful maternal instincts kick right in; she’s licking the first cub right after it’s born. The reason mother tigers lick their newborns isn’t just to clean them off: it also prompts the cub to take its first breaths.

But after a couple of minutes, this cub has only gasped a few times. An increasingly nervous Clark has a hard time resisting the impulse to step in and help. Fortunately, mama tiger keeps at it, and before much longer, the cub starts breathing normally and even makes its first adorable little sounds. This had the zoo staff who were watching on closed-circuit TV clapping and cheering.

This was a good start, but the ordeal wasn’t over yet. When more contractions start, mama tiger looks right at the camera with an expression that says, “Uh oh, here comes another!” The second cub enters the world alive and kicking. Later on, the new mother of two lets Clark pat her on the head and stroke the side of her jaw. Kind of like a house cat, except that she’s bigger than he is!

EDITOR’S NOTE: If you’re a tiger person like me, then I think you will love my other favorite tiger video. You’re going to melt 😉

How did you like this tiger’s instant love for her cubs? Let’s hear from you in the comments section below. Be sure to like and share, too! 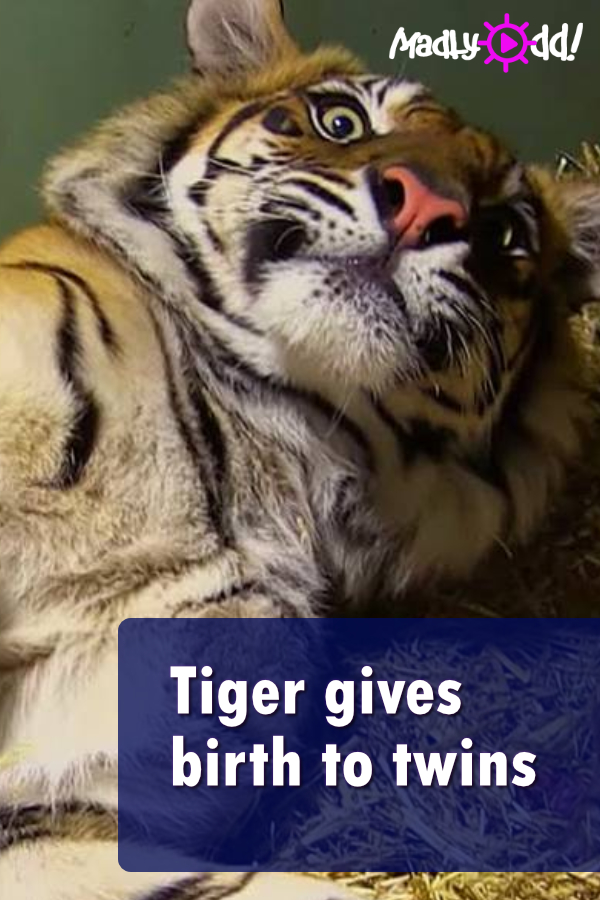