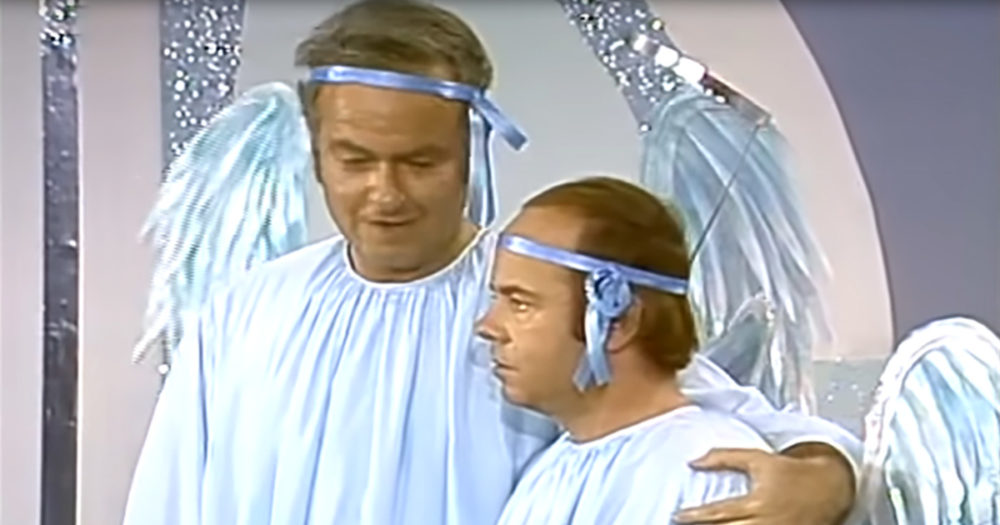 Everybody loves the nonstop, slide-splitting hijinx of Tim Conway. This heavenly sketch is no exception. You’ll laugh ’till your belly hurts when “angel’ Harvey Korman gets a new heavenly roommate.

These guys are such a dynamic comedy. Harvey Korman and Tim Conway made us laugh out loud throughout eleven wonderfully hilarious years. Although never officially billed as a comedy team, the two comic actors were often paired together on this long-running series because they were such a massive hit with audiences. It’s fair to say these guys are OUR generation’s Laurel and Hardy. We were blessed. 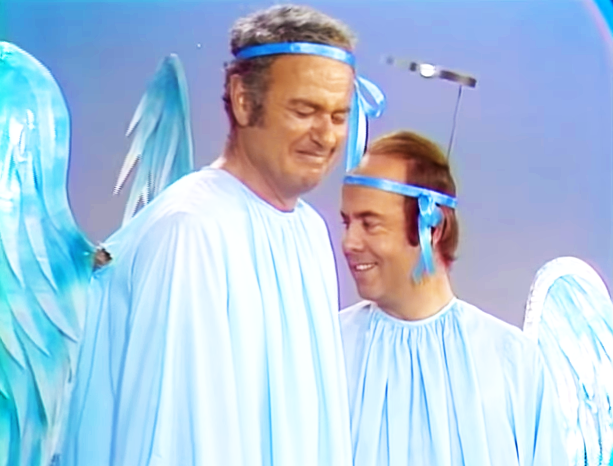 In this gem of a sketch called “New Angel,” Korman plays Angel Haddington, a hardworking harp and halo repairman for the Heavenly Host.

He enjoys working alone, and resents being told by St. Peter that he’s been assigned a new roommate or shall we say cloudmate. When the newcomer turns out to be Tim Conway, a hapless new angel who can’t fly and plays a mouth-harp instead of the usual angelic instrument, Korman goes crazy and who wouldn’t!? 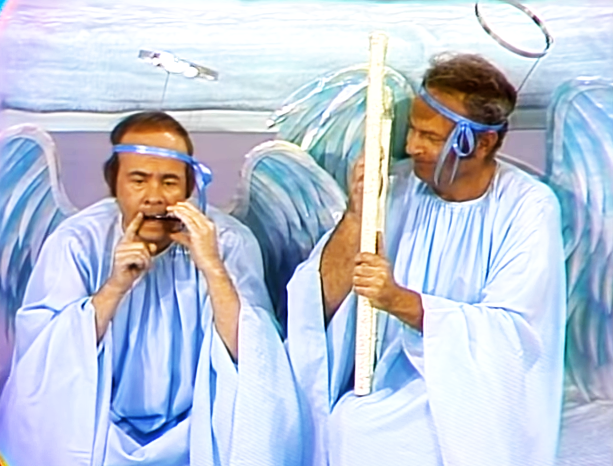 When Tim’s twanging jaw harp fails to soothe an irritated Harvey, Tim tries to win Harvey over with a halo juggling act.  You won’t believe just how wrong this sight gag goes as Tim’s stunt intentionally falls apart.  Harvey finally settles on an idea to get rid of Tim that we never saw coming.

As was often the case when these two took the stage, there is much ad-libbing in this sketch, and Harvey Korman naturally breaks into fits of giggles watching Tim’s antics. His struggles to remain in character are half the fun of watching this zany duo in action.

We bet you didn’t know this fun fact:  Harvey and Tim’s first time working together was in the late 1960s on The Danny Kaye Show.  They loved the experience so much that when Tim joined The Carol Burnett Show almost a decade later, both men were thrilled to collaborate.   Even after the series ended, the two sought out ways to work together again and again.

I was so young when this was on, I laughed then, and I laugh now,” wrote one of them.  “Thanks for sharing these.”

“Now, this is a comedy sketch!” wrote another fan.  “Something that is funny no matter in which era it is watched.” We could not agree more! This is a slapstick comedy at its best, so let’s watch — and pass this video along to a friend who needs a laugh or two.