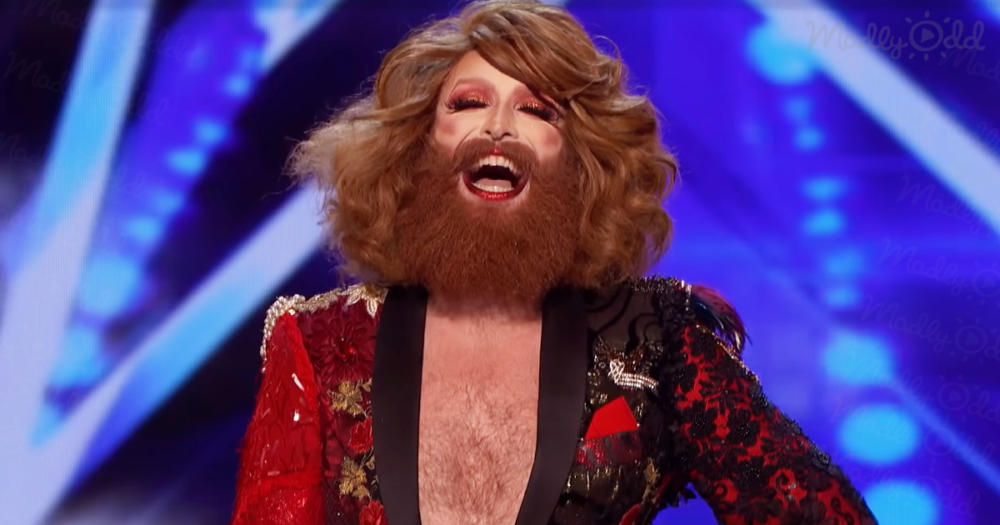 You never know who is going to appear on the America’s Got Talent stage. Just when you think you’ve seen everything, another surprise performer or act pops up.

Dressed in 7” black heels and a short black and gold dress, Gingzilla took the stage to audition for the show. What really took everyone surprise was the fact that this beautiful, red-haired woman had…a beard. Gingzilla is an eye-catching blend of feminine and masculine – beautiful, long legs and great figure paired with the performer’s beard and deep voice.

The Sidney, Australia native going by the stage name of “Gingzilla” first appeared on The X-Factor UK in 2018. Now, it’s America’s turn to experience everything that is Gingzilla.

Everyone seemed to love the fun performance that was full of quirky, unexpected moments. Gingzilla had great dance moves and singing voice, and then changed things up halfway through by singing in a deep, throaty bass. Completely unexpected. You never knew what he was going to do next – and that’s part of what makes a prize-winning act.

To make it on talent competition shows like this, it’s always vital to bring something to the stage that no one can do or has done. Gingzilla accomplishes this completely. This will be one performance that you will definitely never be able to forget.

While drag performers are nothing new, this one is. This particular audition clip from The X-Factor UK gives us a sneak peek on what to expect when Gingzilla takes the U.S. stage.

The 7-foot tall drag performer made an impressive and intriguing figure. Gingzilla quickly had the audience and judges clapping along or snapping their fingers to the smooth, jazzy song.

In an interview with Radio Times after his audition, Gingzilla explained a bit about why he gets so many mixed reactions to his performances: “I confuse people. I blur the line, and that is scary for most people. Gingzilla makes them question their own gender and sexuality, and how they are perceived…My embodiment of the extremes of gender — very sensual and feminine while also being macho and grotesque — elicits a visceral reaction.”