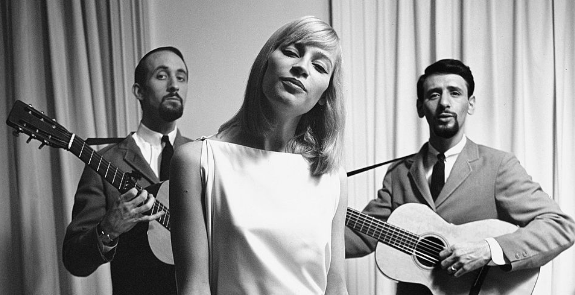 Peter, Paul, and Mary, American folksingers at the forefront of the folk music revival of the 1960s who created a bridge between traditional folk music and later folk rock.

American folk music has a way of soothing the soul or igniting a movement, depending on the intended message. When thinking about the names and voices that shaped Americana through the decades, certain people come to mind that are immediately associated with the movement. Peter, Paul, and Mary are three names that are synonymous with American Folk and this spectacular video shows us why.

In this clip, we get to watch a mesmerizing performance of “Early Morning Rain” by American Folk Legends Peter, Paul, and Mary on “Tonight In Person”. This BBC show entertained audiences with a variety of musical guests from 1963 to 1967. Peter, Paul, & Mary made 3 appearances on the show in 1965-66. The clip we share today comes from their 1966 appearance. 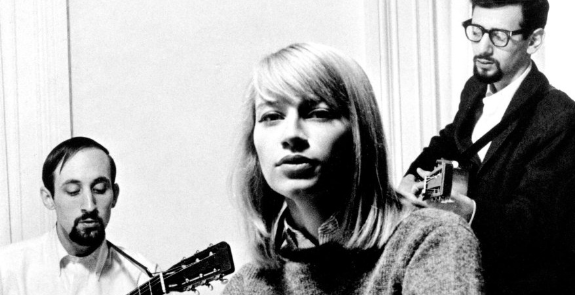 Peter, Paul, and Mary, American folksingers at the forefront of the folk music revival of the 1960s who created a bridge between traditional folk music and later folk rock. The group comprised Peter Yarrow, Paul Stookey, and Mary Allin Travers.

After meeting in New York City’s Greenwich Village, Yarrow, Stookey, and Travers formed a group in 1961. Playing in folk clubs and on college campuses, they built a youthful following with their lyricism, tight harmonies, and spare sound, usually accompanied only by Yarrow and Stookey on acoustic guitars. With their records and television appearances, they popularized both new and traditional folk songs by such songwriters as Woody Guthrie (“This Land Is Your Land”), the Weavers (“If I Had a Hammer”), Bob Dylan (“Blowin’ in the Wind”), and Laura Nyro (“And When I Die”).

Prominent in the civil rights movement and the struggle against the Vietnam War, Peter, Paul, and Mary included protest songs in a repertoire that also featured plaintive ballads and children’s songs such as Yarrow’s “Puff (the Magic Dragon),” which often is mistakenly interpreted as drug-related. After splitting up in 1970 to pursue solo careers, the trio re-formed to release the album Reunion in 1978. In 1986 they celebrated their 25th anniversary with a series of concerts. 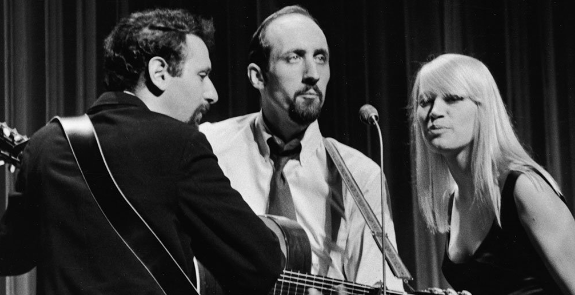 The song they perform, “Early Morning Rain”, was composed and recorded by Canadian singer-songwriter Gordon Lightfoot. Lightfoot composed the song in 1964, but its genesis took root during his 1960 sojourn in Westlake, Los Angeles. Throughout this time, Lightfoot sometimes became homesick and would go out to the Los Angeles International Airport on rainy days to watch the approaching aircraft. The imagery of the flights taking off into the overcast sky was still with him when, in 1964, he was caring for his 5-month-old baby son and he thought, “I’ll put him over here in his crib, and I’ll write myself a tune.” “Early Morning Rain” was the result.

The lyrics suggest someone down on his luck, standing at an airport fence and observing the thunderous takeoff of a Boeing 707 jetliner. The general narrative of the song can be taken as a jet-age musical allegory to a hobo of yesteryear lurking around a railroad yard attempting to surreptitiously board and ride a freight train to get home. Lightfoot reflects that being able to capture this narrative was due to his steady improvement as a songwriter

“I can not believe its been 51 years since this song came out. I was a 12-year-old boy back in 1966 and love the folk music of the 60’s. Peter, Paul and Mary, Pete Seeger, Joan Baez, and Bob Dylan made folk music cool to listen to. They were great social conscious songs that relate to time immemorial. And now that I am 64 years old…This song still captures my heart. I consider the 60’s as the greatest decade in Folk and Rock & Roll music. Priceless!”

“Hearing them sing took me back in time. I’m 74 but for the time that song was on I was 23 yrs old all over again. With my fiance, so very much in love-what good times. Yep, I married him the following year in 1966, this was one of our songs.”

Watch this video now and share your American Folk Music memories with us!